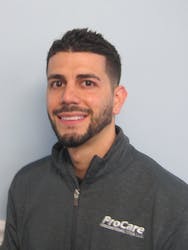 Vincent grew up in Manalapan and graduated from Manalapan High School. He attended The University of Scranton in Pennsylvania, where he graduated with a Doctorate of Physical Therapy, a Bachelor of Exercise Science, and a Concentration in Nutrition. He was a competitive wrestler since he was young and continued wrestling at the college level for The University of Scranton. He also coached the youth wrestling team for his town for several years.

Throughout his schooling Vincent has worked in many different physical therapy settings including acute care, sub-acute care, and outpatient orthopedic rotations. He is trained in various techniques and treatments, including The Mckenzie Method of Mechanical Diagnosis and Therapy.